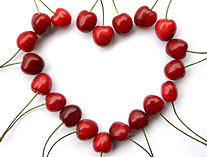 I wasn’t going to post anything for Valentine’s Day, but I was cleaning out a box of old family papers and came across a story written by my great-grandmother (Dessa Hagee Roche), retelling how her father (Jeremiah Hagee) proposed to her mother (Ellen Coble). I checked another family memoir and saw a brief mention of this day, known as “the episode of cherries,” so it must be another one of those stories that was, for a time, passed down through oral tradition. As the story faded over time, I’m glad someone took the time to write down what happened in the summer of 1867.

Jerry was a familiar figure at the Coble home. He had been coming to see Ellen, and bringing her home from church and other gatherings for about two years. There was no doubting his intentions; one day he would propose.

Ellen heard the voice from her bench under the apple tree in the garden. Her heart throbbed violently in her.

“Good afternoon, Jerry.” Her mother’s clear voice carried from the kitchen where she was busy canning cherries as fast as Ellen could seed them. “Ellen’s out in the yard pittin’ cherries.”

On the rustic table before her were large pans of cherries and the old cherry pitter that Grandma Perry had brought with her when they had moved west and settled in North Carolina. It was a hand-wrought contraption that pushed the seeds out of the ripe cherries without smashing them. But the red juice popped out in all directions.

Ellen had been working with the usual serious concentration that she applied to all her tasks in helping her mother run the busy household. Her hands were wet with cherry juice, her apron was splashed, and her face must be spotted and smeary.

Realizing her appearance, panic seized her and quickly jumping up, she found herself running to hide in the orchard. Her bare feet carried her quickly along, but not fast enough to escape the owner of the stout army brogans she heard pounding after her. “Ellen, Ellen!”

Then he caught her and although she had only promised to think about marrying him, and talk it over with her mother, he was kissing her, her eyes, her mouth, and every last red spot on her face, neck, and hands.

“Ellen, you are the sweetest girl in the world!” This time a kiss on the chin, “sweet enough to eat.”

“Oh Jerry, please, you mustn’t! I haven’t spoken to Mother yet. Please, Jerry, I’m all covered with cherry juice!”

“But you will, Ellen, you will marry me? Won’t you?” He held her gently in the ring of his arms. Her silky brown hair curled softly around her face. The whiteness of her skin was accentuated by her pretty red mouth and the spots of cherry juice on her face. Her large brown eyes in the small childlike face looked into his blue eyes with serious candor.

“There is no one to take my place. Mother would have to do all the housework and take care of the babies alone!”

Not giving up, he said, “Maybe we could live near by, so you could come over and help your mother some each day.”

He held her hand as they walked back to the table and bench under the tree. Her ankle length dress was made of flowered gingham with a full skirt, under which her bare feet moved unconsciously toward the apple tree. In the summer time she never wore shoes at home, only at church, meetings, or school. The soft soil felt warm and caressing to her feet, and the grasses were cool and clean.

She knew little about life outside of their Illinois farm, but she had watched Jerry transform himself into a farmer after enlisting in the Union Army at 16 and surviving four years of hardship, deprivation, and finally, Sherman’s “March to the Sea.” He was anxious to dedicate his future to taking care of her and making a life together. Calming down from the afternoon’s events and accepting this path, Ellen began her new adventure.