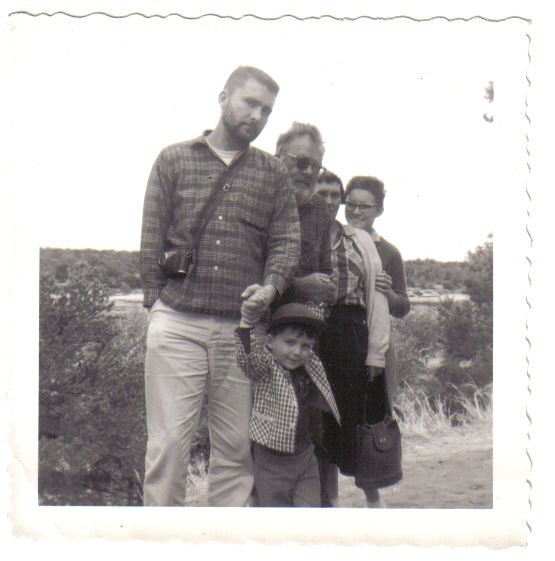 Here is another section from my father’s memoirs. It tells the story of my grandfather (Grandad), George Roche, Jr., and the accident and recovery that shows his fighting spirit:

…During the rest of the 30s, my dad sold X-ray equipment throughout Utah, Wyoming, and Colorado. The family was doing well. My dad drove to doctors’ offices over a large part of the west, putting 50,000 miles a year on his cars. Coming back from a trip to the Western Slope in 1940, trying to make it home for Christmas Eve, his car slid off the road on an icy curve and turned over several times, completely crushing the top and popping out all the glass. He was able to get help in getting the car back on the road and drove 250 miles into Denver that night in a snowstorm with temperatures approaching 0, WITH NO GLASS IN THE CAR. He made it home for Christmas, but before New Year’s, we rushed him to the hospital with double lobar pneumonia. He was dying for lack of air, and the doctors offered little hope. My mother and I spent every day and half the night at the hospital, where he had been placed in what was then called the “kick-off” ward. Penicillin had not been discovered and the complete filling of the lungs with fluid was a death sentence. My dad didn’t give up and neither did we. It took six months and an operation that left a gaping hole in his back for the rest of his life, but he survived.

Our money was exhausted by mid-1941, and my dad had been told he could never work again, and his X-Ray business had ceased to exist because the government was responding to the threat of the fast-approaching war by buying 100% of all X-ray production. This began some very lean years for the three of us. My mother and I, years later in Hillsdale made a list of the places where we lived during the 1940s-50s and the lines of work which provided our living. Sitting at our table in Hillsdale, we were able to recall 26 places where we lived in that time, many during WWII–a rail yard in Salt Lake City, a Salvation Army Store in Greeley, Colorado, a malt shop on Firestone Blvd. in Los Angeles, a packinghouse in Torrington, Wyoming, a ranch near Salida, Colorado, and many rented homes and rooms in rooming houses.

We were running the Salvation Army Store in Greeley when Pearl Harbor was attacked, living in two rooms above the store which we reached by climbing the fire escape in the alley. That Sunday afternoon, my folks were frying chicken, while I, a first grader, played on the floor in the next room. I can well remember the moment when the first news came over the radio. The next day, my dad went down the street to enlist in the Navy. The Greeley recruiting depot, like similar scenes all over the country, was jammed and in total chaos. The paperwork was being processed while he took the physical. When the doctor saw my father’s chest X-ray, he yelled out the door, “All right! Cut out the grab-ass. I’m too busy for these damn jokes. Don’t show me any more chest X-rays from cadavers!”

While I never met my Grandad, I heard he was a tough, loving, family man. He did live long enough to watch his son’s inauguration as the 11th President of Hillsdale College. While I wasn’t born yet, I can assume that must have been a proud moment for him.