With April Fools’ Day just around the corner, I decided to share a classic prank from my mom’s notebook collection.  Over several years, Mom rode the California Zephyr to Denver each month to take care of Grandma Clare.  She always had a notebook with her to keep busy during the long journey.

Long journeys provide the ideal time for reflection.  This past winter, in particular, provided many afternoons to remember, reflect, and record.  My blogging adventure started 4 years ago.  The journey has given so much, healing during tough times, direction and focus when challenges emerge, improvement as a writing instructor, and keeping up with old friends while making new  with each post.  From time to time , I will share some of the earlier, more memorable entries.

The Greatest Generation Goes to College by June Bernard Roche

…While horses were not my favorite animal, I grew up around horses because of my Uncle Bill and other horse people who were trained to invade Italy at Anzio because the invasion was too rough for a mechanized assault and would be completed with horses and mules. I grew up with Cavalry jokes like, “a pack of Horse Dropping Cigarettes–untouched by human hands.” (Which hit me as great humor in 4th grade)

The cartoons of Bill Mauldin were part of my life after the war. I loved the one of the old cavalry sergeant shooting the disabled jeep. Willie and Joe were a good impression of my thoughts about WWII. 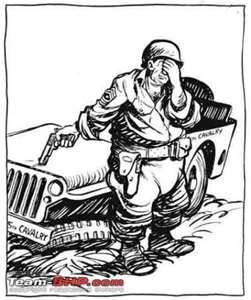 Later in life I got to know the real Willie and Joes who came home and went to college on the GI Bill. At my school, they would tell the tale of these men who had survived the Battle of the Bulge, had shot at Kamikazes coming at their ships and survived the war often with wounds both physical and mental.

They came to campus and among the adjustments were things like getting in trouble for lighting a cigarette. One group of them presented a little surprise at chapel one day. They had filled all the pipes at the Hillsdale College Baptist Church with chicken feathers. The next morning the school assembled for mandatory chapel. The opening hymn began to the accompaniment of a flurry of poultry feathers. As these feathers floated, sometimes in little puffs powered by crescendo from the organist, the chapel became a very scene of collegiate glee as the prank was one of the greatest ever dared.

Our ex-GI’s paid to have the organ cleaned, graduated and went on to become successful in all sorts of endeavors. Eventually one became the President of the Board of Trustees at Hillsdale College as well as numerous trustees. They were the greatest supporters of our little school as were their wives, many of whom they met at the school.

At homecoming they always returned, and I felt privileged to work with, travel with, and party with this greatest generation. They have been leaving us slowly over the last ten years, but the spirit of these boys who weathered the depression and then were sent into the hell of war was the example set for my generation who followed them. We are still trying to live up to your noble sacrifice and courage.

June Bernard Roche was born in Brooklyn, NY, during the depression and spent her early years growing up in Pennsylvania on the campus of Lafayette College. Ironically, she was to live on college campuses for nearly forty years. In 1955, she married George Roche III. They lived in Virginia and Florida while George completed his years of service in the Marines. Later, June taught high school French while George completed his Ph.D at CU Boulder.

They moved to New York in 1965 when George was named Director of Seminars at FEE, the Foundation for Economic Education. June taught French at Dobbs Ferry High School. In 1971, they moved to Hillsdale, MI, where George became the President of Hillsdale College. In June’s words, “We were at Hillsdale until 1999, and we worked very hard to make the college the best institution possible. Since 1999, I’ve dealt with cancer, much memorable travel with family and friends, open heart surgery, the joys of grandchildren and now my first great-granddaughter, and learned how to deal with the winds of change that buffet our lives.”